It was early April, the wind was howling round the old boarding school, and the rain was coming down in torrents, while in one of the cosy little rooms six girls sat chatting in front of the fire. One of them, Maisie Andrews, sat up and said, “Let’s tell some ghost stories!”

“Wouldn’t it be lovely,” agreed Rosy.

“You silly children,” said Emily, who was a little older than the others, “there’s no such thing as ghosts, so why talk about them? Why talk about a whole lot of nonsense?”

“Well, if you don’t like it you needn’t listen, we are going to tell stories. You start,” said little Elsie.

“All right,” said Maisie, “I’ll tell a story that will make Emily believe in ghosts.”

“Well, if I make you believe in them, will you do that sketch of Valentino for me, you know you’re so good at drawing?”

“Yes, if you make me believe in ghosts I’ll do that for you.”

“All right, I’ll go and get the paper and pencils. Irene you come with me.” Maisie got the materials and returned to the room without Irene.

“Where is Irene?” they all said when she came back.

“Oh, Miss Waverly said she wanted to have a talk with her.”

“Well, what about the ghost story?” asked Josie.

“Put the lights out. No one can believe a ghost story while the lights are on.”

“Once there lived, in this very house, a terribly wicked man, whose wife had a lot of money. She had a lovely big dog, which was very faithful to her. The man was anxious to have his wife’s money. One day he called her into his room and said, ‘Woman, your hour has come!’ Then, in an instant the dog rushed in and leapt at the man, but he picked up his gun and shot it. He then said again, ‘Woman your hour has come!’ and again snatched up the gun and shot her, and her ghost still haunts this place.”

A small white figure came into the room, and went straight towards Emily. She jumped from her seat, and became as white as a sheet.

“Now do you believe in ghosts?” whispered Maisie.

“Oh, I can’t help believing in them now, can I? Yes, yes, of course I do.” Then little Irene came out and a sheet lay beside her. Emily was wild with rage.

“How dare you play such a trick on me?”

“You said you did believe in ghosts so you have to do my sketch for me,” said Maisie.

“But you did,” retorted Maisie.

“I’ll do your wretched sketch for you, but I don’t believe in ghosts!”

All at once there came the sound of footsteps down the corridor — and, with the girls hushed and staring at the door quizzically, it swung open, without announcement, and, for the second time that evening, a white figure came into the room.

However, this particular figure, the children noted, was considerably taller than little Irene.

P.J. Hodge is the author of GHOSTS AND OTHER SUPERNATURAL GUESTS, 12 tales of supernatural terror available from Amazon as ebook and Kindle:

Winner of Gothic Reader Book of the Year. 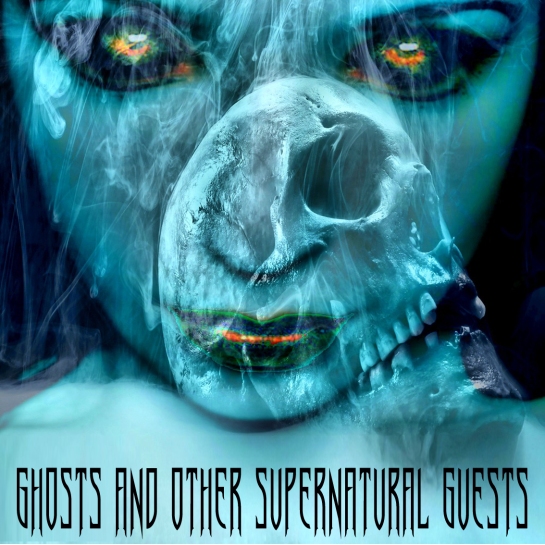