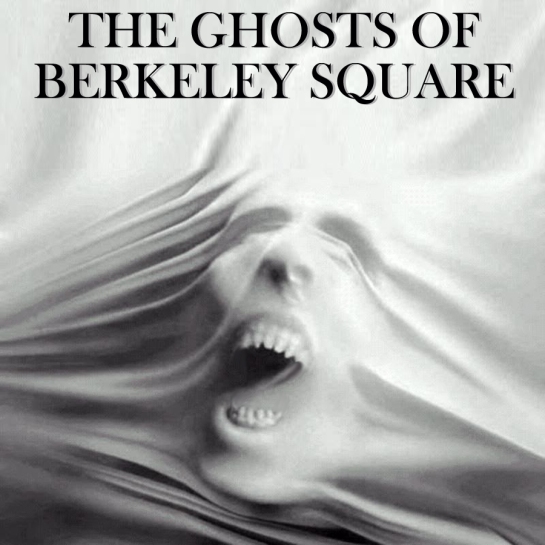 GHOSTS, as Ambrose Bierce said, may be only “the outward and visible sign of an inward fear,” but England and Scotland teem with stories of spine-chilling nomads who won’t stay put, but have spent centuries poking around and frightening the life out of people. No. 50 Berkeley Square, London, is a notoriously haunted house. The very walls of the house have been described as “saturated with electric horror,” and people living in the place have been known to go off their heads and die terrified. Presumably these also come back to haunt the place, so the whole business is a vicious circle!

London has, of course, a veritable feast of haunted houses. From time to time whispers have gone abroad about this mansion, or that; but, with very few exceptions, these reports appear to be idle gossip. An empty house, shuttered, silent, uncared-for, will soon earn, in any part of the world, a reputation for something sinister, whether it be ghosts or — accepting the more prosaic theory — nothing more harmful than vagrants and squatters. But of all the haunted houses there, none has stood the test of time nor earned a greater reputation than the house in Berkeley Square. This mansion has attracted attention on account of its position in the very heart of London, from the terrible nature of the supernatural phenomena of which it is said to be the scene, and from the fact that it is the setting of one of the most famous ghost stories in existence — Sir Edward Bulwer’s Haunted and the Haunters. Although this story does not claim to be anything more than fiction, it gives a very fair idea of the reputed happenings in the house in Berkeley Square.

The ghosts here seem to have taken a different form with various occupants. One story is that a virtuous young maiden once threw herself from the windows of a top room to escape a wicked relative with bad intentions. According to report, the poor girl can still, at times, be seen hanging on the window-sill and screeching her head off.

Some years ago the house, having stood empty for a long period, was taken over by a family whilst preparing for their daughter’s marriage in London. They had no idea of the sinister reputation of the place, and were engaged in arranging their furniture and preparing a small room for their daughter’s fiancé, who was expected to visit the following day. It was the first night of their occupation of the premises, and, when the clock pointed to near midnight, a housemaid went to the room allotted to the expected guest to complete preparations for his reception.

Twelve o’clock had no sooner struck than piercing shrieks were heard issuing from the room, loud enough to summon the whole household. They rushed upstairs, flung open the door, and found the unfortunate girl lying in convulsions at the foot of the bed. Her eyes were fixed with a stare of horror upon a corner of the room, and an agony of fear seemed to possess her.

She was immediately removed to another apartment, and medical assistance summoned. But, in spite of all that could be done for her, and the entreaties of the family to explain what it was that she had seen, the girl refused to say what had terrified her. She said that she had seen ‘something’ — but what that something was she declared to be too horrible to bear recounting. Her state got worse; she was removed to St. George’s Hospital, and there died, still refusing to divulge the nature of the awful thing she had witnessed.

Now what she had witnessed was a mystery. She never gave any account of the horribly strange sight that must have met her gaze. The story got passed around London circles and was laughed at. The tenants avoided the room, which was again locked up, and no more was heard of the ghost for awhile.

It happened one evening that the occupants gave a party. There was a small dance, and amongst the guests were some army officers. There was some interest expressed in the haunted room, and several of the guests — particularly the military ones — laughed at the idea of a supernaturally-possessed room. Finally, the spectral subject absorbed general attention: dancing was discarded for discussion; the believers outnumbering the sceptics.

“I’ll bet you £5,” said one young officer, “that I will go and remain an hour in the haunted room and come down entirely unharmed.”

“Don’t!” fretted the more timorous of his friends.

The lady of the house and her husband both tried their bests to dissuade him. But he was firm. He laughed ghosts to scorn, and jokingly bade “farewell” to his companions. He carried a candle, and as he prepared to climb the stairs to the room, which had been lighted with gas, some presentiment appeared to affect him, but he laughed away all remonstrance.

“You won’t frighten me with a legion of ghosts,” he said. “But I’ll secure my escape. Remember, if I ring once, you will be ready to come upstairs, because you will then know that I have seen something and may require assistance.” They vowed they would, and he continued, “but if I ring twice, you will at once know that I am in danger, and then come up as fast as ever you can. I shall not ring without reason.”

They wished the young guardsman luck, and standing in and near the drawing room door watched him ascend the staircase. He gave them a hearty “good-bye,” entered the room, which was fully lighted, and shut the door loudly. The noise echoed through the house now silent, for all present, even the servants, were on alert, and the ringing of the bell was anxiously awaited. The men stood on the landing; the ladies largely remained in the rooms, talking only in whispers, and feeling, as one expressed it, as if something was going to happen. He had been gone 15 minutes, and no sound had alarmed the guests. Bets were discussed and wagers made that he would not ring, and that there was no “ghost” nor mystery.

Suddenly a low ” ting, ting” was heard from the basement. There was no mistaking it — he had rung the bell! On the startling notice the ladies jumped up, and some of the men began to climb the stairs. A few were for dashing up at once, but the bravery of their friend and their agreement held them back; still they were ready for a rush up the flight at the first tingle of the second bell.

Some terrible minutes passed; the ticking of the clock was heard by all. Then a loud, monstrous crash of the bell; a sound of dreadful significance to all who heard it. Two seconds was enough for the men to reach the room and burst open the door. This is what they saw — The young officer, stretched rigid in his evening dress on the bed — dead! His jaw had dropped; his eyes were wide, staring vacantly in mortal terror; a silent, stony fear and awful horror stamped on his features! His left hand clutched the bell rope which had summoned his friends. But no presence was visible. No form manifested to alarm the others. There he lay, bare, staring mad in death. What he had seen—whether demon or spectre— must for ever remain a mystery as great as ever puzzled the London world. He died, frightened to death by the terrible apparition which he had in some manner defied or offended.

After these two terrible incidents the house remained empty for many years, until a young couple, desiring a home in this fashionable neighbourhood, approached the owner with a view to renting it. He was very loath to let it, and it was only on the urgent request of the newly-married couple that he agreed to do so. The house was handed over to painters and workmen to put into thorough order, and, with a view to making final preparations for the new occupants, the young wife’s mother came up to London the night before to get all ready. She was accompanied by a maid, and, knowing nothing of the house’s reputation, took up her abode for the night in the fatal room.

At midnight her maid heard a loud scream, and, rushing to the room, found her mistress dead upon the floor.

On two subsequent occasions, the house was the scene of similar occurrences, people still being found, who were willing to experiment with the powers of darkness. One man took his dog with him and compelled it to spend the night in the haunted room. The animal, apparently possessed of more sense than its master, at first refused to enter the house. It was eventually dragged in, but spent the whole time growling and whining and endeavouring to escape. The unfortunate animal was not spared by the evil forces at work, and in the morning was found in the haunted room with its neck broken.

The other investigator was accompanied by his servant, who spent the night on the landing outside the door of the dreaded room. On this occasion nothing happened to the man within, but the unlucky servant was the witness of some terrible sight, for at midnight he ran shrieking from the house. Like the other victims, he could never be persuaded to divulge what he had seen.

Visiting spiritualists and mediums attributed the manifestations in the house in Berkeley Square to the activities of a former resident, an elderly lady who had practised the dark arts. It was suggested that the subsequent hauntings were a punishment for her former necromancy. Whatever may be one’s belief in the supernatural, no one will deny the danger of anyone but those with the strongest will venturing to investigate the mystery of haunted rooms. The late W. T. Stead, one of the most accomplished of spiritualists, stated most wisely that persons of weak will power should, on no account, experiment, there being several incidents on record of such people being driven out of their minds by fear and shock.