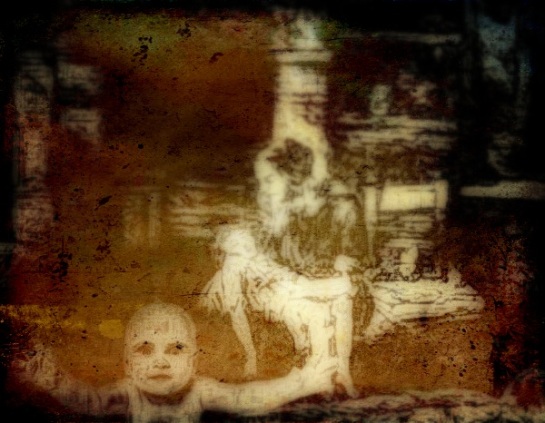 It was the February of 1909 when I came to the tenement building in Philip Street. Though it was little more than two low-ceilinged rooms 10 feet square — the sole entrance a narrow, dingy hallway that led from a “poor man’s road” to the rear tenement-house — it was the best I could afford, and possibly more than I could expect considering the ill-found fate I had so far incurred.

I had been the mother of two healthy, fit boys — the eldest a sanguine child of two years and seven months, the other a darling baby boy of eight months — but, on April 3rd, I noticed my little baby had died. He was a lovely, chubby baby, with a dimple in its chin and a dimple to mark each knuckle in its tiny fingers — a sweet a baby as ever was mourned by an agonised mother. And he, having given up life’s struggle after such a short time in this world, lay there, waiting next to me for someone to come and take his little body away. Sympathetic neighbours huddled in the little room and about the door, but they were as poor as I and could extend no helping hand. My eldest, round-faced but now so pale, stood by the cot and gazed first at his baby brother lying so still there, with a dainty sweet violet in his marble hand, and then at me, wonderingly.

The baby had been very sick, but the doctor, a good man, had tended him and he was all well till Sunday. Then his breathing appeared to take on an agonising tone, the air here being so bad. So, I took him down to the park, by the river, where he could get fresher air. We sat there on the bench for such a long time, baby sleeping on my lap.

Then, first I knew, he gave a cry, his little arms and legs drew up and I knew he was in a fit. I rushed him back home but I could not do anything, my baby was dead.

When it came to the funeral, a small number gathered with bowed heads, tears streaming from their eyes. I knelt, resting my head on the foot of the tiny coffin, the frame shaking with my emotion while the vicar spoke the words of the service.

The following days and nights I spent in the depths of despair and unable to repress my grief, I went to the cemetery four days after the burial. It was about eight o’clock in the morning. What added to my discomfort was that towards daybreak a disagreeable drizzle set in, one of those hideous rains, which dampens the very soul and makes one an easy prey to every gloomy foreboding. I stood just a short distance from the grave, when I was seized by a terrible coldness, and, in that instant, I became aware that at the edge of the plot was an object shifting to-and-fro upon its own weight. I stepped a little closer and saw it to be a cradle nestled within the boundary stone. At first I was horror-struck, but maternal affection getting the upper hand, I approached the grave. When I came upon the white stone, there was nothing of the cradle just the circulating pools of rainwater collecting upon its surface.

A wave of black depression fell upon me and, sinking to my knees, I was possessed to begin scraping at the soil. It was as if the physical separation of my hands from my mind gave unconscious animation to my clawing fingers and, with increasing ferocity, I attacked the loosening soil with an ever tightening resolve to find my baby. Finally, I had cleared the layers of earth and punctured the flimsy strips of coffin wood, and stripping back the sod-stained linen I exposed the tiny bundle of flesh. With my baby restored to my arms, I tried to give life back by massaging its face with my hands. The last thing I remember before the shadow of unconsciousness descended was the hard thud of a body pressing against me, wrestling the child from my arms.

I awoke several hours later, having been looked after by a kind neighbour. The lady had such sympathy for my plight and told me that she herself had lost several babies. She spoke of how such grief can turn one’s mind, to the point where it loses all proportion of rationality and craves to attempt the resurrection of what is lost. END_OF_DOCUMENT_TOKEN_TO_BE_REPLACED