If houses are haunted by the spirits of the departed, why not ships? The real reason why you hear so little of haunted ships is that the sailor, unlike the landsman, keeps a very still tongue on such subjects. For one thing, he hates to have his stories received with scepticism; for another, if he happens to be the skipper or owner, he takes good care to be silent on such a subject because history is full of stories of the enormous difficulty of getting a crew for a vessel supposedly haunted.

Tales of the deep relating to spectral ships are among the most attractive of stories, and authors of all kinds have embellished them with many fanciful and picturesque details. Indeed, every maritime country has its phantom ship.

The coasts of Cornwall are second to none in the wildness, the variety, and originality of their sea superstitions. For nowhere else in Europe has the sea taken such a toll of dead and still takes.

All along the Cornish shores the phantom ship is thoroughly believed in, as also are tales of phantom lights dotting the rocks and shoreline. A hundred or so years ago a schooner-rigged vessel put out signals of distress to the west of St. Ives Bay. A cable sent out reached her, and one of the seamen attempted to grasp at her bulwarks in order to jump on board; but his hand engaged with nothing solid, and as he fell back into the boat the schooner and her sailing light disappeared in the darkness. Next morning a ship out of the port of London was wrecked within the same vicinity, and all on board her perished. The phantom lights are observed generally before a gale; the Cornish seamen call them “Jack Harry’s lights” — named after the first man to be fooled by them — and the ship seen resembles the one that is subsequently wrecked.

The sinister death ship is a superstition peculiar to Cornwall. With a hull as dark as night and stumpy bowsprit she comes in, with all her canvas set, against the wind and tide, and as she turns to steer to seaward again the doomed person dies. Most famous of the stories grouping round the death ship is that of a wrecker who lived at Tregeseal, enticing vessels with false lights and doing to death those who escaped the waves. When a poor soul lays dying, a black ship full rigged with all sail set would be seen coming in upon the land against the wind and tide; and as the man died she bore out to sea again in the blustering gale. 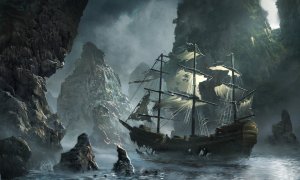