“Again came the ominous knocks, louder, more insistent; but whether threatening or merely clamorous he could not decide. Now, with a veil lifted he approached the doors of the lobby with utmost dread and having fixed his eyes steadily on the drawer from which the tapping evidently proceeded, he saw what looked to be the knuckle-bone of a leg of lamb, about the size of a very small walnut, protruding and jerking repeatedly against the wood lying beneath its doors. At length the drawer opened further, and a naked human leg grinded its way through the fold. The foot arrived with a dense, deathlike sound to the floor, resting there for what seemed to the terrified man to be at least half a minute before the body to which it belonged was disclosed to his view.”

From ‘The Haunted Cupboard‘ 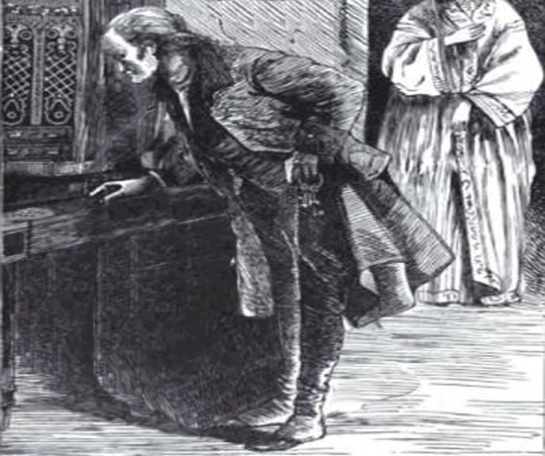 “Now where was I? Yes — poppycock sir!” barked the older of the two gentlemen. “There is as much life in your peculiar theories as there is in the Dodo!”

“You may scoff sir but—”

“My dear boy,” interrupted the older gent, “there is, without doubt, a certain malignancy in everyday objects that we have no dominion over. Take the Lucifer match for instance. Nothing can be in its way more irritating than that small piece of wood. Who can tell when it will light, when it will refuse to light, when it will break in the middle, when it will snap off just at the top after lighting, and leave it a fiery head on one’s hand? But all this will go on no doubt even after the world has accepted the philosophical theory that the Lucifer is a malign and a capricious thing like some ill-conditioned gnome or sprite or imp. We cannot educate or convert or punish a match any more than we can a sprite or imp!”

The two gentlemen sit facing each other over their drinks; the older man having just returned from attending a call at the door of the club where they presently reside. In the gloom of the evening, the fitful gleams of the fire had suggested to the one just seated the idea of discussing the subject of ghosts, in particular the surfeit of reports regarding the supernatural possession of inanimate objects. The younger gent is a tall, slender, considerate sort of man with a voice that seems to carry with it the slightest hint of impatience, and altogether one of those persons who, we may be inclined to think is given to the supernatural fancies common to his age.

“But sir, you yourself said—” the younger chap stopped mid-sentence, appearing to calm himself. “Look, despite your propensity to pooh-pooh all that is other-worldly we are sat here discussing the theory all the same!”

At that the older gentleman quietened and took some time in pensive thought to consider his next words.

“The whole human race might,” he said, “be brought into that league of universal self-obliteration if it were for such a belief. Even the lower animals might be persuaded or coerced into the same arrangement.”

He raised his pipe and looked sharply at his fireside companion.

“Now suppose man were universally willing to extinguish himself — what guarantee could he possibly have from these inanimate things that the moment he had disappeared they would not start the whole machine of existence all over again. You cannot have a compact with the sands of the desert or the salt of the sea or the stone in a quarry. You cannot have a treaty with the dust of the highway or an alliance with the coals in a mine. Even if you could have such an arrangement, who could answer for its being carried out? Who could trust these things to keep their plighted words? The moment our backs were turned they would be sure to set the whole mechanism going again, just for the perverse fun of the business!”

The younger man took his glass from the top of a neighbouring cabinet and sighed. He was obviously losing patience with his companion who was intent on obfuscation. END_OF_DOCUMENT_TOKEN_TO_BE_REPLACED