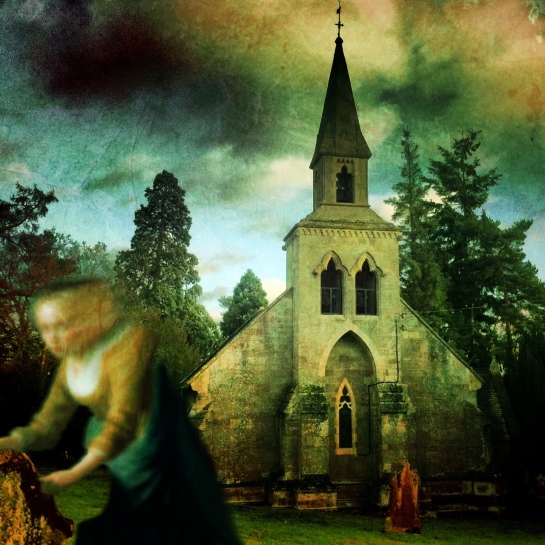 Step into St. Calixtus, a church in the sleepy Shropshire hamlet of Astley Abbotts, and walk a path around the nave to find glass-encased and dripping wax-like the remnants of the funeral of Hannah Phillips, sitting unadorned and still of childish innocence. Upon an iron rod hangs the maiden’s garland; its heart-shaped frame holding her gloves, decorated with cloth and ribbons faded and yellowed. This sad feature, like garlands before and after, has served as a reminder of the death of a bride-to-be, cut down just a short time before her wedding. Upon the arrangement, chaplets of white paper flowers and a ribbon-like piece of paper saying, in still legible handwriting, that it commemorates Hannah Phillips who drowned whilst crossing the Severn on the eve of her wedding, May 10th 1707.

The Phillips family lived on the far side of the river, and years ago, there used to be a place where people could ford the channel. A day or two before her wedding, Hannah set off for the church to help with the preparations. And she was never seen alive again.

Locals say that she slipped at the ford and drowned, her body finding its way to a sunken cave lying below the ford. The only item found was her small clutch bag, floating in a shallow pool further downstream.

If it had not been for the maiden garland hanging in the church, this sad little story may have been forgotten — and for the greater part it was — until the early 20th century that is, when sightings of Hannah’s ghost began to be reported…

Mr and Mrs Owen moved into Little Severn Hall, a pretty riverside house north of Bridgnorth nearly forty years ago. A few years later, Mr Owen was returning home one evening by car. Though the skies had begun to darken, the road and hedgerows were still reasonably lit. Just up the road from his house, past the farm, between Severn Hall and The Boldings, was a lay-by with some oak trees, opposite a field with a little pool. As he approached the widening, he was shocked to see a woman appear, from out of the hedge, hovering a short distance above the road, and gently drifting to the other side.

With no time to turn, he came upon the woman, and in the instant he would have collided with the shape, it disappeared. What he had seen was a young woman, about five feet tall, in dark, drab clothes. She wore a long skirt, which reached to the ground, and a shawl pulled up over her head. He saw a side view of her as she floated across the road; the person was slim and wore clothes of an earlier time, though not fancy, more country working class. And she never looked to either side of her.

Mr Owen told a neighbour about this the next day — at that time, he knew little of the history of the area. This man told him the story of Hannah Phillips. It seemed to both gentlemen that the spectacle, though lasting but thirty seconds, was a ghost, and possibly that of the drowned maiden, again making her way to church.

But that is not all. Nearly twenty years before, another local man, Mr Tipton, had a similar experience in the same area. He was twelve at the time and was cycling home towards Colemore Green late in the evening, after finishing work on a nearby farm. Suddenly, in front of him, in the same lay-by, he saw a man wearing a suit. As he approached the figure, it faded and disappeared into the surrounding hedge. It was only once he had got over the shock of its vanishing did he recall the phantom’s attire: a dark brown suit and breeches.

Could this have been Hannah Phillips’ intended husband, still searching for her?

And the month: it was May.

A garland shall be framed
By Art and Nature’s skill,
Of sundry-coloured flowers,
In token of goodwill.

And sundry-coloured ribands
On it I will bestow,
But chiefly black and yellow
With her to grave shall go.

I’ll deck her tomb with flowers
The rarest ever seen;
And with my tears as showers
I’ll keep them fresh and green.

3 thoughts on “Drowning of a maiden”