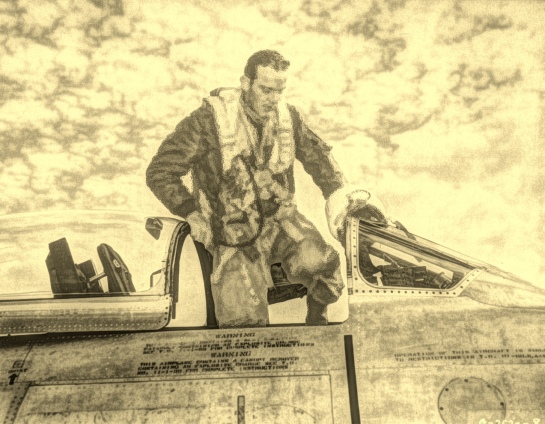 A pupil of mine has just begun to write ghost stories and science-fiction.

I’m very impressed with his work so far and feel that it would give him the confidence he needs as a budding writer if he had a few bloggers taking a look at his work – and possibly ‘liking’ it too!

His latest effort, Sweet Bird of Truth (aka ‘Ghost Pilot’, a play script) is in its early stages but it looks to be taking shape nicely.

The page can be found here: 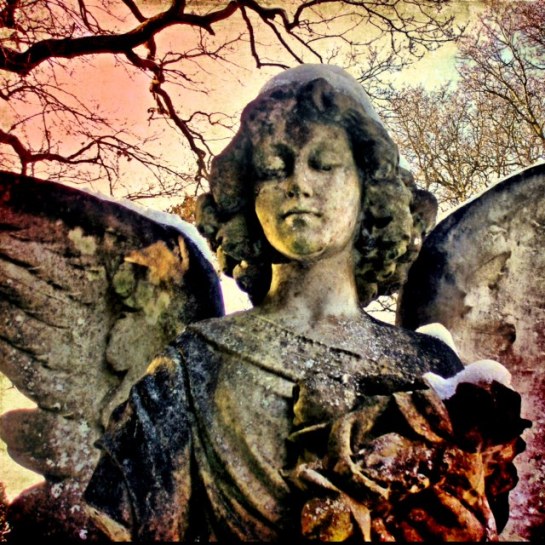 I was out earlier taking photographs of snow-tipped Victorian angels in a local graveyard and was reminded of this morbid phrase …does anyone know its origin? (I believe its 17th C or earlier) 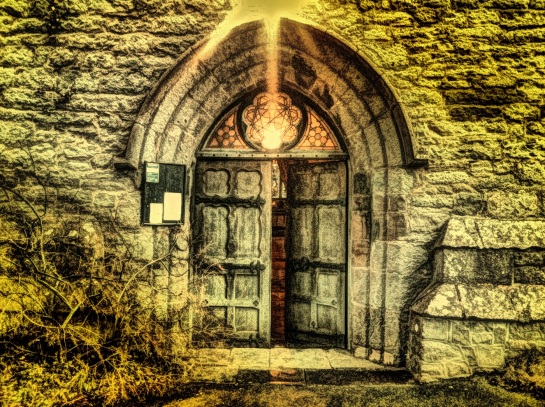 Cowering under the deep shadow of St Michael’s church lies the little village of Chirbury, its population rarely venturing beyond the crooked line of buttresses that maintain its walls. Equal in number are those that will not pass through its cemetery; for here, the tendrils of time have reached across the ages to bind brick and soil to an ungodly power, a power diffused into the village conscience. Step into its realm and one feels touched by a sense of suffering, a gateway to the past.

END_OF_DOCUMENT_TOKEN_TO_BE_REPLACED

My partner often asks me why I write ghost stories — and why I don’t write wholesome stories for children. My answer is simple: there is more horror in our local communities, on every street corner, than there is a single macabre tale. Tales of nefarious deeds and the supernatural are often vehicles for exploring human frailty; in telling them, we may help society to debate and unravel the age-old moralistic dilemmas we as humans are constantly trying to understand and define. 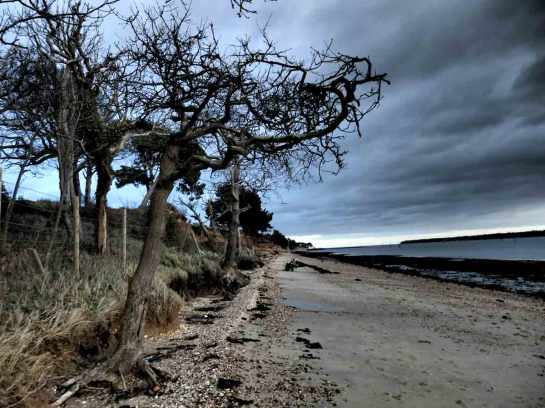 A bolt is thrust aside and one half of a stable door swings back. The sound of a sharp kick announces the peeling back of the second. A bulk of a man steps through carrying a thick meshed bundle of sticks and logs searching for a suitable spot to dump the damp load; his nose is held aloft, at a distance, enduring the sickly-sweet aroma of the mildewed bark. His face fidgets nervously until the wood is set down on a sheet of newspaper, neatly dragged into position by his foot. The dispatching of the load relieves his body, but his expression still retains the weary slump it entered with.

It is almost time for Manning to leave, a suitable moment to consider the sweet restorative powers of a few days by the coast. And with this thought, he finds his spirits lifting. It has been several years since he last visited Leet and walked its impressive shores; he has missed the place. No longer resisting, he succumbs to the pleasantness teasing his lips.

Perhaps you know Leet? It is a south facing sandy beach next to the entrance of the Beaulieu River in Hampshire, a landscape rich in character, with great stretches of open and unspoilt countryside.

But it is the agents of erosion that have defined this sea-place. The shore is littered with corpses: trees that have finally, but grudgingly, relinquished their fragile grip on the sandy soil, just a few metres above. Tendrils of seeping rainwater and the gnawing effect of the wind have gradually removed the earth, exposing roots to the mercy of encroaching elements. It is a natural decay, but not one that removes all evidence of existence; for old trunks lie entombed in wispy layers of sand, creating fragile barrows on the shore. In the early hours of a wintry morning, the landscape transforms into a surprisingly gloomy affair; the dead bodies of trees are thrust into the greyness, and any living thing roaming amongst the decay looks quite lost, as lost as a child. END_OF_DOCUMENT_TOKEN_TO_BE_REPLACED 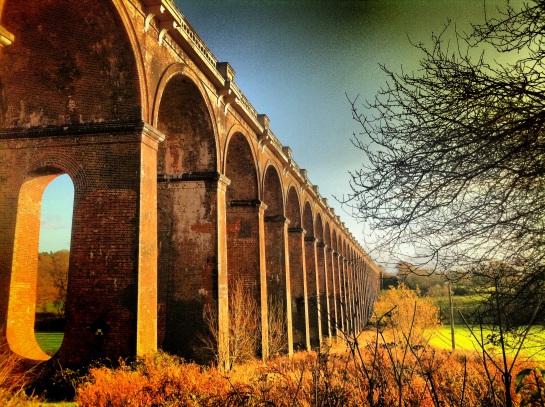 I had returned to Balcombe out of instinct, not for pleasure. Though the train had refreshed my memory of its seductive beauty I had a less romantic place for those thoughts to reside. The landscape view of sun-drenched streams and sparkling lakes played like a cinematic trailer, catching the attention of the couple opposite me who immediately sprang into a congratulatory embrace. This only served to heighten my unease with the place.

A sudden lurch of the train announced our arrival, propelling the occupants into a flurry of activity. All around me, day tripping couples leapt from their seats and set about passing bags as elegantly as possible from carriage to platform. With this I allowed myself a wry smile; briefly charmed by the obvious enthusiasm of the new arrivals.

Alighting on the platform I turned and looked down the length of the train, beyond the carriages, towards the track curving away into the distance. Though not visible from this point I knew the rest of the line well; not to mention the shadows that dwelt within its tunnels and archways.

On reflection, it occurred to me that this was an entirely perfect setting for what had happened. With so many trains passing over the structure on the Brighton Main Line, the spirits of men that toiled here could never be far away from the living.

But it is the ghosts of more recent times, just as numerous as those of their Victorian counterparts that I am here to consider. For now his words are clearer to me than at any time over the decades that have passed since they were uttered. This is his tale; one told to me almost forty years ago, when I was a young man living in Balcombe, working on the London to Brighton line. END_OF_DOCUMENT_TOKEN_TO_BE_REPLACED 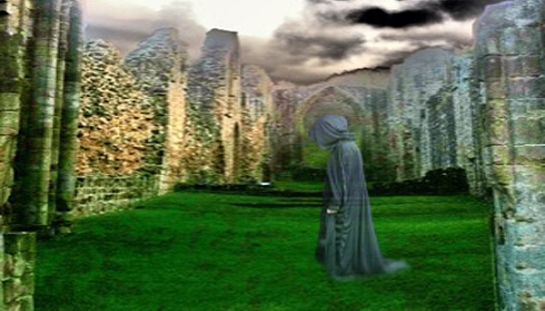 The beautiful ruins of Lilleshall Abbey sit lonely and unheralded at the end of a farm track, tucked away in an unexpected, sleepy corner of the Shropshire countryside. The decaying walls of the Abbey are shielded from the nearby road by a line of trees and feel distinctly isolated and sheltered from the outside world.

Stand at the centre of this imposing structure and breathe in the atmosphere; touch the cold, lichen-covered walls and journey through time to a darker, less enlightened age.

It was a miserable day to arrive at Lilleshall: the sky was a thick mass of angry cloud; the wind had whipped up and driven channels through the grassway; and the rain was beating heavily, spreading fierce torrents across the ancient grey stone. I had parked the car in a neighbouring lay-by, just in case the approach proved too small and busy; why I don’t know – anyone else would have turned back in this weather. But rain or shine I had made the commitment to visit Lilleshall several days earlier; and as anyone who knows me will testify, once entered into my notebook only death or disaster would see me change my plans. 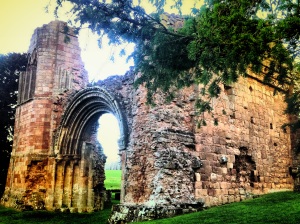 I walked up and stopped central to one of the walls; my eyes were immediately drawn to the beautiful arches that soared across the distinctive red sandstone wall, rising and falling above huge glassless windows. But it wasn’t enough for me to only see; the desire to run my hands across the centuries was too strong. I clasped the sodden stone, letting the rivulets form rippling pools around my fingers; my breathing quickened and all at once I was overcome by an intense emotion; an indescribable connection; a peculiar and uneasy sense of oneness with the ancient edifice. END_OF_DOCUMENT_TOKEN_TO_BE_REPLACED 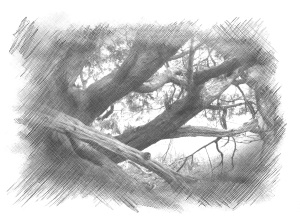 As I stand here, the whole Vale remains a strange and foreboding place; from the outside the entwined trees give little away to the eye about the woodland. Once inside the first thing is the quietness, the birds are hushed and the canopy of yew reduces the sunlight to a winter glow. Even at the height of summer, Kingley Vale feels a deathly cold place.

Why I had returned after all these years I could not answer. But memories are strange things, especially those that cast a shadow over a lifetime. The darker ones have an unconscious life of their own; a fleeting thought or an unusual smell may turn on their ignition, sending the memory roaring into action. I had passed the station for years but only today had the flames of memory urged me back to the Vale. More forceful was the desire to travel as I had done all those years ago; a carriage to the past. Gazing at the reflection in the window, I had watched my car drift away as I had watched my father wave me off from the same spot decades before. In that moment, the two images had become one and lurking behind them was a dreadful-looking tree… END_OF_DOCUMENT_TOKEN_TO_BE_REPLACED