As Americans gather for the Thanksgiving holiday, it is perhaps time to turn the clock back to one family feast that did not raise quite as much cheer.

It tells of the terrible incidents that took place in a house in Oakville, Georgia, U.S.A in the latter part of the nineteenth century. This spot had earned a high place amongst haunted localities, and, in its day, was comparable with the famous house in Berkeley Square.

Situated in the midst of picturesque but lonely country, this house, the property of a farmer named Walsingham, had a world-wide reputation amongst psychical investigators.

For some time the house had been left deserted by its owner, and it would seem that during the temporary absence of its material master it passed into the hands of beings or forces —call them what you will — who wished to remain in undisputed possession.

When Walsingham and his family decided to return and take up their abode in the house, they were struck on the very first day by the peculiar “feeling” of the place. They could not decide, in any way what this feeling was, but, on analysis, likened it to claustrophobia, an overpowering dread of being alone within any four walls.

Their dog, Don Caesar, absolutely refused to enter the house. On being dragged in, he immediately broke out into furious barking, his back bristled with rage, and he showed every sign of terror. This occurred several times during the day, and the same evening, being attracted to the spot by his whines and howls, Walsingham saw his dog attacking some invisible enemy. Don Caesar at last sprang in the air, as if at a man’s throat, but fell back as if he had received a heavy blow. When picked up, his neck was found to be broken.

The Walsinghams’ cat, on the other hand, manifested every sign of delight at being in the house. It strolled from room to room, purring loudly, and was seen on several occasions twisting its head from side to side and arching its back as if someone were stroking it.

To say that the Walsinghams were amazed at these things would be to describe their feelings mildly. They were very much upset, but had not, as yet, any suspicion on the score of supernatural causes. But that evening, just towards the dusk, the house was suddenly filled with shouts, groans and hideous laughter, heard by all the occupants, and putting them into a veritable panic. Miss Amelia Walsingham, while sitting in front of her mirror, saw a man’s hand upon her shoulder, yet there was no reflection of it in the glass, nor was there any arm or body apparent. Walsingham himself saw footprints, forming in the dust of a garden path before him as he walked, yet no mortal could be seen.

But though these things were uncanny and terrifying, and were sufficient to make the family realise that some force out of the usual was at work, they paled into insignificance before the later incidents which took place during the evening meal.

The family was seated at supper with one or two guests when their conversation was suddenly interrupted by a loud and horrible groan, uttered, apparently, in the room above. Little notice was taken of it until one of the guests pointed out a stain of what looked like blood on the tablecloth, and it was then seen that some liquid was slowly dripping from the ceiling overhead. This liquid was so much like freshly shed blood as to horrify those who witnessed its slow dripping. 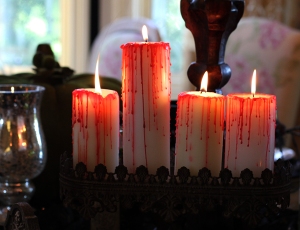 It would be hard to imagine a more gruesome occurrence at any time, but the peculiar form of this horror, and the theatrical way in which it was carried out, would put it down as the invention of some most evil-minded but decidedly clever person.

It flashed into the minds of all sitting at the table that some terrible deed had been committed in the room above, some frightful murder. For a few seconds all sat silent, with white faces, looking out of the corners of their eyes at each other in terror. Then Walsingham shook off this paralysis of fear and ran out of the room, followed by his son. They went quickly upstairs to the room over the dining-room and flung open the door, dreading what fearful sight their eyes should meet.

But it was empty.

They tore up the carpet, and there found the boards to be soaked with the same red, gruesome liquid as was dripping into the room beneath. But there was no explanation, nor was any afterwards discovered. The liquid was later examined under a microscope by a medical man, and pronounced to be human blood.

This incident was too much for the Walsinghams, and they left the house and removed to another. Walsingham House then fell into entire disuse, and, stories of the occurrences being put abroad, the place was shunned by day as well as by night. This neglect did not tend to make the spot look more cheerful, and it is stated that, in addition to the gloom that generally settles on the most ordinary of empty houses, there was an undoubted feeling of depression in the air around the place. Quite normal people said that it felt to them as if the atmosphere of the locality weighed more than anywhere else.

The house had not been approached for several months, when a young man named Horace Gunn made it the subject of a wager, betting a friend a fair sum of money that he would stay alone in the house for one night and have no aid within call. This enthusiastic young man carried out his intention, and went to the house one evening before it was dark. His story is best told in his own words:

“I had been in the house about an hour and nothing had happened. It was just beginning to get dark and I thought that I would set about lighting a fire. Though I do not consider myself an expert in this art, I was very much surprised at being absolutely unable to do so. My matches went out one after the other, as if blown out by a strong draught. Once when I had succeeded in lighting a piece of paper, it only smouldered for a few seconds and then went out. This was bad enough, as I had to give up the idea of a cheerful blaze to keep me company, but, to my disgust I found that my lamp would not light either. It was as if it were filled with water instead of with oil.”

“It was now quite dark, and, whilst I was looking about for some means of getting a light there came a terrible yell of pain from underneath the house, and this was the signal for an outbreak of the most hideous and devilish noises. There were shouts, screams, groans, laughter, thumping, and the continual running up and down stairs as of several heavily shod people. My hair bristled, I stood by the window, practically paralysed with fear, and had I then been able to control my limbs I would have fled from the house. I would have lost my wager and a hundred like it rather than stay in that haunt of fiends.”

“Then, suddenly, the noises stopped; complete silence fell on the place. But, far from reassuring me, this made matters worse, for now I dreaded the silence even more than I had the ghostly noises. All the time I listened — listened — for something. Now and then I thought I heard soft footsteps drawing near me, but it was nothing. This waiting and dreading was far worse than the pandemonium of terror.”

“I did not have long to wait for the next move, for, in the darkness, there suddenly appeared a small spot of greyish light on the wall opposite me. It grew larger, and larger, altering in shape, until it assumed the outline of a human head, at the same time losing its flatness. Soon it was a real head, floating in the air. Its hair was long and grey and matted together, and it had a deep and jagged cut in one temple. The whole face indicated suffering and misery. The eyes were wide open and gleamed with an unearthly fire, while they seemed to direct their gaze upon me. The head moved about the room, but always the eyes were turned in my direction.”

“Then it vanished, but there broke out in the room a loud and awe-inspiring wail as of several souls in anguish. I thought then that I could see indistinct shapes flitting about, and, mustering up all my courage, I attempted to pass them and gain the door. But just as I reached it, I felt my ankle seized in a firm grasp; I was thrown down and felt fingers grasping at my throat——”

At this point Mr. Gunn’s story ceases. He was found by his friends next morning, unconscious on the floor by the door, and bearing on his throat “the marks of long, thin fingers, with cruel, curved nails.”

After this experience, no one was found to have anything more to do with the house, though a few people interested in such matters attempted to find out some reason for this terrible haunting. Though several avenues of investigation were explored, nothing very conclusive was discovered.

The house had by this time acquired such an evil reputation that no one would occupy it, and it was ultimately demolished.

Many human bones were found under it and in its grounds. How they came there was never known, but it was supposed that they had lain there for many years, and were the bones of people who might have been murdered when the house was a roadside inn of very bad repute.

And herein, perhaps, lies an explanation for the hauntings at the house: a few days before returning to his house, Mr. Walsingham, having discovered in the grounds some old, dried bones, and not able to decide whether they were human or not, settled the matter, as he thought by ordering them to be thrown into a lime kiln.

Is it possible that the spirits of the men whose bones were thus so indecently treated, summoned to their aid certain dark forces in order to make the place uninhabitable by mortals, in revenge for the insult offered to their remains?

3 thoughts on “A FEAST OF TERROR, a ghost tale for Thanksgiving”