I just wanted to express my thanks to the many readers who have supported and contributed to my blog over the past year. A very merry Christmas to you all!

The highlight of my year has undoubtedly been the number of readers who have bought, and favourably reviewed, my first collection of short ghost stories, GHOSTS AND OTHER SUPERNATURAL GUESTS, which is currently 4.5 stars on Amazon and winner of the Gothic Reader Book Choice award for 2013!

The book is available on Amazon here: http://myBook.to/ghosts

I am indebted to all my wonderful blogging friends who regularly comment on and promote my short stories of the supernatural. Please continue to spread the word!

Kind regards and best wishes to you all for 2014!

Yes sir, as you say, an engine driver needs to have his wits about him. With a train-load of passengers under his care and at his mercy, he hasn’t much time for wool-gathering.

I often think what a terrible thing it would be if by some mysterious means a driver and his stoker were to suddenly die on duty when the train was rushing along at full speed, leaving the engine to go on its own sweet way. No living power would be able to stop it, and it would have to go on and on, either until it met with some obstacle, when its living freight would be hurled to destruction, or until the fires got too low to supply the steam pressure.

A queer thought? Well, yes, you’re right: and I admit there is little likelihood of such things happening; but it is a possibility all the same, and you can’t stop a man’s imagination from running on strange fancies.

As a matter of fact, I was once on the verge of sudden madness myself, when I thought there was only a minute between me and eternity. And I have had one or two other unpleasant, blood-curdling experiences during my twenty odd years on the line.

As you say, it is very seldom you hear of a railway man going off his head, and those who are entrusted with the position of driver—even on slow trains— are all tried hands. In fact, on our line it is a standing rule that every man who wishes to become a driver must first serve for some time as stoker, then he is put on as a sort of probationer, and allowed to drive a goods train. If he proves himself steady and efficient, painstaking, and reliable, he is next promoted; and, finally, he has a remote chance of driving one of the great expresses.

Yes, I’ve had one or two accidents in my time, not through any carelessness of mine, though. Indeed, I don’t know of any driver on our system who has had fewer than I have, and I can honestly say that I have never once been reprimanded for negligence of my duties or failure to realise my responsibilities. Still, as I say, there have been a few accidents, and a few deaths, for which my engine was indirectly responsible.

No. I am glad to say I have never been in a collision —not a real one that is, though I once thought I was in for it. The incident happened two Christmases ago, and if ever a man was near losing his reason I certainly was that night. It was a most uncanny experience, but, as them novelist chaps say thereby hangs a tale: and a weird, ghostly tale it is.

Supernatural? Yes, I reckon that’s about what you would call it; but to me it was a very natural and serious happening at the time.

You would like to hear the story? Well, so far as I am concerned, you are welcome; but, seeing that you are going up tonight, I would not advise you to hear it unless you have a strong nerve. It’s a strange, unearthly tale, more so because it’s true.

Very good. Just as you like; only I didn’t want to frighten you. END_OF_DOCUMENT_TOKEN_TO_BE_REPLACED

P.J. Hodge’s Ghosts and Other Supernatural Guests is a fantastic Gothic collection. The writing style is reminiscent of the Victorian classics, but it’s adapted to a modern audience. The crisp pacing reads well, and the archaic touches make a great framework to give the stories a very authentic air. The stories focus on Victorian ghosts, hauntings, manifestations, and psychological fear. Hodge is skilled at building tension rather than using gore and violence as a narrative tool. Very well done.
If You Like: M.R. James, Henry James, Guy de Maupassant
GOTHIC READERS BOOK CLUB Choice Award

Available as ebook and paperback from Amazon: http://myBook.to/ghosts

“At Chrystmas tyme,” to quote an old chronicler, “ye ghostes do love to walke abroade.” And certainly there are many ancient houses at which spectres of the past are as inevitable a feature of Christmas as the turkey! 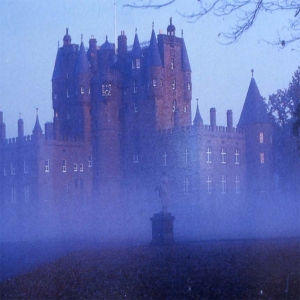 Strange and terrifying tales are told of the ghosts that gather at Glamis Castle, that grim Forfarshire home of the Earls of Strathmore, at Christmas time — of a bearded man who flits about at night and hovers over the beds of sleepers; of pale faces that peer through the windows and vanish to an accompaniment of shrieks; of sounds of hammering, “as if somebody was putting up a scaffold.” And these are by no means the greatest of the castle’s terrors. A lady guest at the castle awoke one Christmas night to hear the moving of a soft body over the floor of her bedroom, and the crack of a bony joint, and then to see the outline of something “luminous and horrid.”

“Slowly,” she says, “the thing, whatever it was, took shape. A body, tawny and hunched; arms long and spidery, a large and terrible head covered with a tangled mass of grey hair, a face white and staring—pig-like in formation, malevolent in expression.”

“As I stared at it aghast it reared itself on its haunches and leered hideously at me, then, shuffling forward, it rolled over and lay sprawled out like some ungainly turtle. At this juncture the handle of the door turned, someone entered, there was a loud cry, and the. whole tower, walls and rafters, rang with the most appalling screams I have ever heard.” END_OF_DOCUMENT_TOKEN_TO_BE_REPLACED

THE GHOST BUREAU, a spirit raised at a séance craves an earthly presence…

“Listen!” said she, “don’t you hear the sounds around us? Spirits coming to take me to heaven. I don’t want to go to heaven, I want this life again; but there is only one way to avoid it. The spirits want a soul to take away, and it must be a young woman’s soul. You – you are about my age, are you not?”

The first of 12 spinechilling tales for Christmas, GHOSTS AND OTHER SUPERNATURAL GUESTS (rated 4.5 stars on Amazon)

Available as Kindle ebook and paperback: 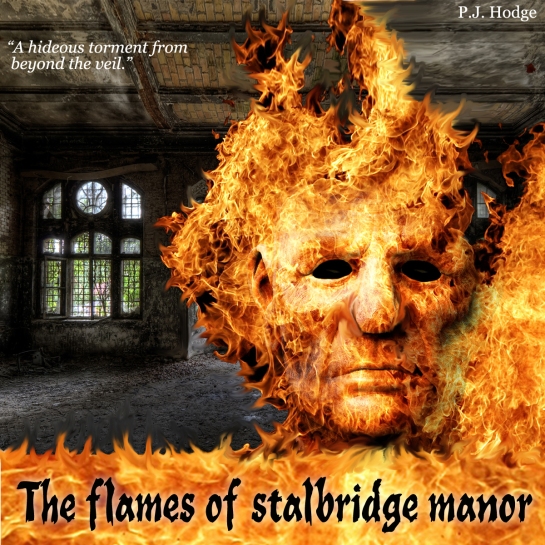 THE FLAMES OF STALBRIDGE MANOR, one of 12 tales of haunting from GHOSTS AND OTHER SUPERNATURAL GUESTS by P.J. Hodge.

“To his horror, he could see that the light stemmed from the brilliance of flames burning within. And then, in an instant, he felt an intense heat, blasting across his face as if an oven door had been opened. Only a moment later, from out of the inferno, came the most horrific of sights: a woman, her body aflame, shrieking with a hellish sound, pitifully attempting to pull the searing fabric away from her blistering flesh.”

THE HAUNTED PALACE says…
“The tales range from childhood adventures with a tragic twist (The Viaduct); the truly horrific spectre of The Flames of Stalbridge Manor; to the heartwarming A Tip of the Hat. This is a perfect book to read, by a crackling fire, in a lonely manor house, on a dark and stormy night – was that a tree-branch tapping on the window-pane..or could it be Ghosts and other Supernatural Guests……!”
http://goo.gl/uyszCU