I don’t belong to any society, but I take a great interest in what are called occult mysteries. I pursue my investigations in my own way, and not long ago was on the lookout for a haunted house. I had an open mind on the subject of hauntings: all I wanted was to prove the truth one way or another. I heard after some research of a house in the northern outskirts of London — there are many lonely places about there. I arranged with the agent to have the use of the house for a week. He assured me it was quite empty — not even a caretaker was in it. No one, of course, would come near it, as the belief in its being haunted was profound, and the whole neighbourhood shunned it.

This looked eligible. I departed one evening, in high spirits, for my solitary vigil. Of course, there was a murder connected with the house, but the exact nature of the haunting I had never been able to get at. To discover this would be part of my work. It was early autumn, at the moonless part of the month, so that the nights were dark, but not cold, and I needed no fire. I supplied myself with food and light.

The house looked decidedly gruesome — in a melancholy state of dilapidation, windows broken, shutters off their hinges, the doorsteps green with damp; the garden was a wilderness. However, I have a large fund of animal spirits, I am the right side of forty, and my life has been an easy one; I am not, therefore, a person of moods or ready depression. I explored my temporary possession unscared by the rush of rats and mice and the cracking of loose flooring. Fortunately I found some old furniture — useless even to the poorest second-hand dealer — scattered about the house; some of this — a few chairs and a table — I brought down into one of the rooms that seemed best to serve my purpose.

What was I going to do? You — if you are uninitiated — may ask. Why, sit up for a ghost? — or an appearance, hallucination — what you like to call it. It sounds funny; I can quite see that; and you may think that if I saw anything it wouldn’t prove much. Somebody else, of course, would explain it away. But, anyhow, here I was.

It wasn’t my cue to remain in one place. The ghost — or hallucination — might be disporting itself in one part while I waited in the other, and we should thus be dodging each other — a sort of hide and seek. So I roamed about up and down very much as if I had been the perturbed spirit. Everywhere I heard creaks, groanings, flappings — no wonder the place was believed to be haunted. I am certain every plank had the dry rot in it. I had some supper and enjoyed it; a spirit stove supplied me with hot coffee — my only drink.

Then I composed myself on two chairs. I may have dozed; I remember thinking the silence oppressive, and then suddenly starting up at some sound below. What was it?

No doubt I ought to have gone to the door and looked out, and perhaps called out, to see what or who was there; but I stood still. If you shout out rudely to a — well, a ghost, you destroy your own purpose. This may have been my reflection — I don’t say it was. So I waited — as any scientific man would. 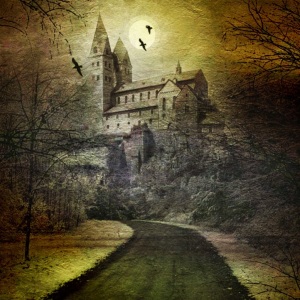 Why did I attach any particular importance to this sound? Well, it was different from all I had heard — like somebody groping in the dark. A ghost wouldn’t grope, you object; ghosts are familiar with the dark. Exactly; that’s quite right; but it didn’t occur to me atthe time.

A door closed — I’m sure it did ; and there was a door shutting off the passage leading from my room to the rest of the house. I fancied, too, the key was turned — but this must have been fancy.

What was it — who? A stealthy step came right up to my door, paused — good heavens! a ghost at such close quarters! It came in — it — he — something! I fell back in my chair.

I heard a laugh, then something cold touched me on the forehead. A hand — a ghostly hand, of course — I thought wildly, then opened my eyes.

“You keep still and I won’t hurt you,” said a gruff voice. “Looking after ghosts,, was you? Well, I’m the ghost — a rum sort, as I wants that there watch of yours.”

I am no more deficient in courage than most men — I had thought I was more efficient in the matter of nerves. But with a knife at your side it is necessary for the most courageous to temporise. I cursed myself for a fool in coming to this lonely place unarmed.

“Oh, Lord! Stow that! Good friend, indeed! Fork out that there watch.”

I did not wear a guard; my watch was carried loose in my vest pocket. It was a valuable gold one; worse still, a gift.

“You may as well remove your dagger,” I said: “I have no weapon.”

“You’ve got ‘ands ain’t yer? You might floor me. Got any money? Fork out that too.”

I had some gold about me. I handed that out—there was no help for it. I hoped it might appease the wretch’s desire for my watch. How in the fiend’s name did he know I was here? Had that idiot of an agent been blabbing? I didn’t mean to lose my life for my watch, but I did mean to make a try for both. I said carelessly:

“That is a trifle of money. I have plenty more, though not about me. The watch is of more value to me than it could be to you.”

I did not think my assailant was a regular burglar; he did not look like it; and no burglar would come to a deserted house on the chance of a ghost-hunter being unarmed. The man was probably one of the bad characters every neighbourhood possesses.

“You think I’m a goin’ to trust you, do yer?” he demanded sneeringly; ” No; I ain’t then. You just give me that there ticker and I’ll clear out, and you can look after yer ghosts again. Yer didn’t think to meet such a ghost as me?”

He guffawed. I, in silent dignity, measured my chances of knocking the knife out of his hand and freeing myself. But he was a confoundedly cautious fellow — he never once released his hold on the weapon. And who was to know if I were murdered in this desolate place?

Disdaining invective, I drew out the watch. He seized it. “My eye!” he said, “ain’t that a winner, and no mistake!”

“Since you have got all of value I possess about me,” I observed politely, “perhaps you will do me the favour to withdraw.”

“All right, guv’nor. You won’t come a-lookin’ after them blooming spirits again in a ‘urry, will yer? Lord! Ain’t this ‘ere a plant. Well, I’ll be off. Much obliged, sir, for what you’ve guv me. Good-night, and I ‘opes you may find a ghost as won’t want bread and cheese.”

With which facetious adieu he retired, but still retaining the knife in his hand. I heard him unlock — yes, I’m certain now of that — the passage door. It slammed, and I was alone.

I’m afraid I swore extensively — swearing is an awful relief, and I was as mad as I could be. If only I hadn’t been such a craven fool when I heard those sounds I could have kept my money, my watch, and my self-respect. As it was, I hated myself; I hadn’t a penny to get back to town, and I quailed at the chorus of fun in the papers. Catch me running after ghosts again! After all, how would my solitary experience prove any truth ? Hang the truth !

I tramped it home. Fortunately I am a bachelor, and have no inquisitive wife to want to know. I made cautious inquiries of the agent if anything could have been known of my eccentric tenancy of the haunted home; I didn’t wish the newspapers to get hold of it, I explained.

“Oh, dear, no, sir!” replied the gent, with overmuch zeal; I quite understand how unpleasant you’d find it. No, sir; I give you my word I haven’t told anyone.”

“Thank you, and I trust you will keep it that way.”

“Yes — yes indeed, sir. But tell me, did your visit not prove fruitful in any way?” he asked in a hopeful tone.

I thought quickly and decided it best that I should say little concerning my stay.

“Shame —shame about that. We’ve had a few recently and all claim to have seen it — him, I suppose.”

“Who?” I enquired. There was a sudden shortening in my breathing.

“That villain, the one in the papers. Got caught he did, by the gentleman that owned the place. Murdered him, too — shot whilst in the act!”

“Sorry, my good man, to whom are you referring?”

“Jack, Jack —,” he paused and rubbed his chin, “Well, I’ll be blown — can’t remember his second name. Still, no matter, he’s been spotted in the place. A few overnighters have told me that. And you have to chuckle — don’t suppose there are many places that have a burglar for a ghost!”

11 thoughts on “The ghost hunter”